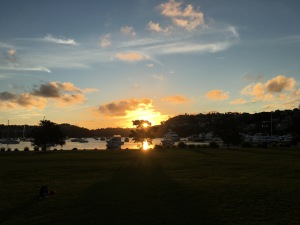 Getting back into the swing of things has taken a little time after the Sydney Sailboat Expo and working out what is priority along with DeckHardware over winter. I have been back at the gym where my new favourite class is Drums Alive! Such a great way to start a Saturday with a bunch of energy and friends.

I managed to catch up with Liesl Tesch and Erica Kirby before Liesl headed to Europe to compete. A catch up in the park whilst talking sailing rules and pretending to be boats on land. I am sure anyone driving past the Spit that afternoon looking at the Sunset must have been amused and wondered what on earth we were doing. What better way to spend an afternoon in Autumn! Spending time with Liesl is always inspiring and a great deal of fun.

Liesl is now with other members of the Australian Sailing Team in Medimblik about to take part in the Para Worlds which start Tuesday! Good Luck team! Check out the Aussie Sailors Rock group on Facebook where we cheer on Aussie sailors competing overseas.

It has been a big few months for the Andrew Simpson Sailing Foundation as the planning for Bart’s Bash is now in full swing.  Here in Australia there are a number of clubs already signed up and more that have confirmed verbally.  Here is a link to the latest news on this year’s Bart’s Bash.  Last week whilst in QLD I caught up with the team at Southport Yacht Club where Aussie Ambassador Joel Turner will be supporting this year’s Bart’s Bash. It is great to hear that plans are underway with Ambassadors involved!

I have a few plans for here in Sydney for this year’s Bart’s Bash so stay tuned! So far there are clubs in VIC, NSW, QLD and WA! In 2016 Bart’s Bash will be raising awareness and funds to support grassroots disabled sailing globally. The 2016 edition of Bart’s Bash is scheduled for 17-18 September which is on at the same time as the 2016 Paralympic Sailing Competition. The timing is incredible considering everything that is going on, with this being the last chance for Para Athletes to compete in Sailing for now.

Whilst in QLD on Thursday I dropped by the Gold Coast International Marine Expo and Sanctuary Cove International Boat Show. It was great to catch up with so many from within the sailing industry for a chat. We have seen some big changes in the last few years and working together we can certainly be stronger for it. I finished the day catching up with Alistair Murray from Ronstan talking rules, sailing, friends, industry, women in sailing and more. There is always so much to talk about when it comes to our sport and industry. If you work in the Aussie Sailing Industry check out our Facebook Group and you ever want to catch up just send me a message.

Just walking around Amsterdam enjoying my day off.
A day out enjoying some sunshine to adjust to the time zone.
The sun is shining! Hello Amsterdam. Now to stay awake a few more hours.