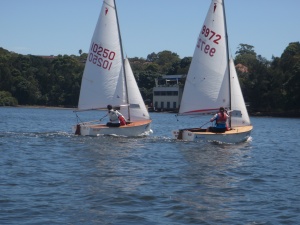 There is something special about watching a young sailor “get it”. On Sunday I had the pleasure of heading out on a RIB to watch the Heron NSW Junior State Titles at Dobroyd Aquatic Club. This coming weekend I will be doing the same at Narrabeen Lakes Sailing Club where I spend my Sundays. After some terrible weather recently we were so lucky that the rain only came as we were all headed home which meant we had a great day on the water. The breeze started light and gradually built to around 15knots. Perfect for the little skippers who were for some giving it their first attempt.

The Heron class do such a great job of fostering young sailors. There was the first start which was for Junior / Juniors then a second start for Juniors with their Senior crews. A big hats off to all the adults who jumped into the front of the boat! Now to my point of seeing young sailors “get it”. Up the front of the Juniors there are four boats who were so evenly matched and all pushing it hard it was just fantastic to see. The Skippers Jerome Watts, Emma Harris, Matt Doyle and Georgia Llewellyn. Not only are they fantastic young sailors but they also have a great attitude and respect for each other on and off the water. Watching them have close racing around marks and tacking on top of each other and sailing clean at the same time was a joy to watch. The skill in boat handling was evident even as Georgia unfortunately capsized and Matt had issues with his pole. They both showed the skill and maturity to deal with the situation they were in and stay on the water and try their hardest. Fantastic to see.  The other three skippers all wished Georgia better luck next weekend after her swim even if they did make fun of her choc top.

These sailors truly are showing such skill it is hard to remember they are still so young and can improve so much more.  Looking at their sail trim, mark roundings and so much more it is obvious they enjoy their sailing and take pride in doing the best they can.   It is obvious too by the banter on and off the water that these four skippers push each other to further their sailing.

I am so looking forward to watching the last three races this weekend and have no doubt the winner will not only be deserving but that the others will also celebrate with them. As a sponsor this is something that is fantastic to see and as a sailor it is why we love the sailing community so much.

The Heron class have apparently been doing this for years.  Letting their little crews have a go at steering in a regatta is just such a fantastic idea and the parents have done such a great job of fostering this talent into little skippers who turn into skippers of their own boats as they get older.  It is no doubt a tribute to the adults in this class that:

These young sailors get it.

Not as many photos from shore this year as we hid from the Sun. Thanks to the @deckhardware ambassadors for the great company before and after sailing. Thanks to @natrad100 @alex.leslie43 and @harrylawson_ for ensuring the RIB was on the wharf every day ready for me. Even if it made your daily drive super quick on water 🤣
What a day to be on the water. These three always entertain in their unique way.
Totally ready to get out on the water and for the season ahead…